You are here: Home1 / Our Story

Thanks for your interest in the Hobee’s Story. We’re glad to have you with us as we continue to make history! 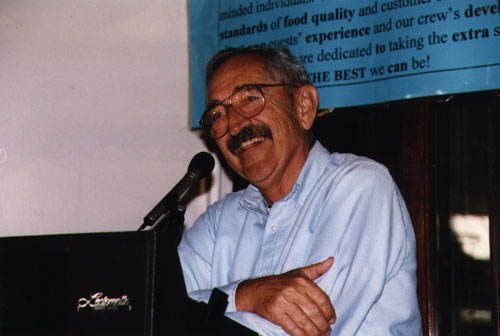 Founder Paul Taber built the chain with a legendary attention to customer service.

In 1974, the first Hobee’s Restaurant was founded by Paul Taber and his family in Mountain View, California. Located in a former Dairy Belle franchise, the first “Hobee’s Haven” initially served a variety of sandwiches and fast food-type items. Initially, there was no dining room and all the food was ordered and served out of two windows on the outside of the building (closed up, but still there today!). Soon after opening, the insurance office next door became available and the first expansion took place, resulting in a modest dining room with nine tables.

Early on, Paul’s son, Peter, joined the team and brought with him an interest in vegetarian food and cooking. Along with Paul’s fervent commitment to great customer service and love for the bounty of California produce, they began to lay out the base for what would eventually become a Silicon Valley institution. The Tabers strived to create a community-minded family restaurant which featured freshly prepared food and outstanding customer service. Paul attached the made-up name “Hobee’s” to the restaurant because it evoked a fun, friendly image.

Those first few years were challenging and humbling. The tiny Mountain View eatery consistently lost money, severely testing the Tabers’ resolve. At one critical juncture early on, the family van was sold in order to make payroll. As the healthy eating craze of the mid 1970’s took hold, however, Hobee’s name recognition began to steadily grow. Favorable word of mouth and several rave reviews in local papers prompted an increasing number of diners to sample Hobee’s exquisite breakfast and lunch menu, along with its wide array of healthy options. Buzz around town also centered on Paul’s “people first” philosophy of service; his genuine, caring attitude toward the customers was a refreshing change to those accustomed to the disinterested service offered by other coffee shops. Not surprisingly, Mountain View’s ascendance also corresponded with the introduction of the now-famous concoction craved by fans from around the globe: piping hot, streusel-topped, Hobee-made blueberry coffeecake.

After a second expansion of Hobee’s Mountain View, the Tabers were emboldened to open a Sunnyvale location in 1976. That first Sunnyvale location was sacrificed by the Tabers when the opportunity to open Hobee’s Palo Alto – a superior location – arose. The family opened two more locations within the next decade: Stanford (1984) and San Jose (1986).

By the mid 1980’s, Hobee’s had become enormously popular among Peninsula/South Bay diners. The four Taber-owned locations began to reap several important awards, including a slew of “Best Breakfast” citations from local newspapers. Booming business sparked the decision to franchise the Hobee’s concept. Franchising gave the Tabers the opportunity to work with others who shared the Hobee’s philosophy of caring and excellence. Among the locations opened during that era was the sole franchise to survive: Cupertino (1986). That site continues to thrive today.

By 1990, Hobee’s had firmly established itself as one of the leading restaurant chains in California. Expansion, however, was slowed by a sluggish state economy. This respite from growth, however, provided a prime opportunity for Paul Taber’s son, Peter, to come into his own as the chain’s dynamic young leader. Peter implemented several innovative systems and procedures which improved customer and employee satisfaction. Peter’s achievements at Hobee’s and in the community at large led Congresswoman Anna Eshoo to nominate him for U.S. Small Businessperson of the Year in 1993.

In 1994, the Tabers once again caught the expansion bug when a “can’t pass” proposal was made for a second San Jose location off Montague Expressway. The line-out-the-door opening proved that Hobee’s, even after two decades, was still reaching new markets. In 1996, after a two decade hiatus, the family made a triumphant return to Sunnyvale with yet another hit restaurant.

In the fall of 1997, the Tabers opened a Hobee’s in Belmont / Redwood Shores. That restaurant marked the first family-owned site to be located in San Mateo County. The populous area, which boasts a healthy mix of business and residential occupants, proved to be an ideal setting for a Hobee’s.

With the summer 1998 announcement that Town and Country Village in San Jose would be demolished, the Tabers launched a search for a nearby replacement location. In 1999, a deal was struck to place Hobee’s in the thriving Pruneyard Shopping Center in Campbell. The spacious restaurant drew immediate crowds upon opening in March of that year. Hobee’s San Jose closed the following spring and its passing was mourned by the many regulars who appreciated its funky charm.

In 2005, a new leadership emerged at Hobee’s. Co-owner Edward Fike, a 1990 graduate of The Santa Clara University School of Law, took over as president from his partner Peter Taber, who assumed the role of chairman of the board. Ed forged an effective partnership with vice president and area manager Camille Chijate, who began her Hobee’s career in the late 1980’s. Together, they tightened operations and continued to strengthen the brand with innovative ideas.

Though expansion seemed unlikely at the time, the owners were immediately intrigued when a former Baker’s Square location became available in Los Gatos in mid-2008. It was another “too good to pass up” opportunity. Just before Christmas that year, Hobee’s Los Gatos opened up to the biggest opening crowds in the chain’s 35 year history.

Though Hobee’s was able to survive the turbulent economy of the next several years intact, a trio of closings within a twelve month period made headlines: Hobee’s Stanford was closed in January 2013 after the new ownership at Town and Country Village demanded costly renovations and increased rent. Los Gatos was also shuttered in August of that year after failing to live up to its promising start. Finally, popular Pruneyard served its last meal on January 5, 2014, as the owners faced the daunting prospect of a doubled rent. Fortunately, many employees who desired to remain with the company were placed at other Hobee’s locations following the closures. Notably, amidst the difficult farewells, the remaining restaurants posted sizable sales gains as customers selected new Hobee’s homes. It also didn’t hurt that Vice President Joe Biden made a splashy, well-publicized visit to Hobee’s Sunnyvale in June 2013.

After riding the wave of Bay Area economic growth for the next several years, the stage was set for a major transition. In June 2017, the Taber family sold the chain to two trusted, longtime employees: the husband and wife team of Camille and Daniel Chijate. The Chijates certainly earned the opportunity with their hard work and dedication. Both Camille and Daniel had logged 28 years as Hobee’s employees. Customers and co-workers agreed that there was no better choice to carry on the Hobee’s legacy. 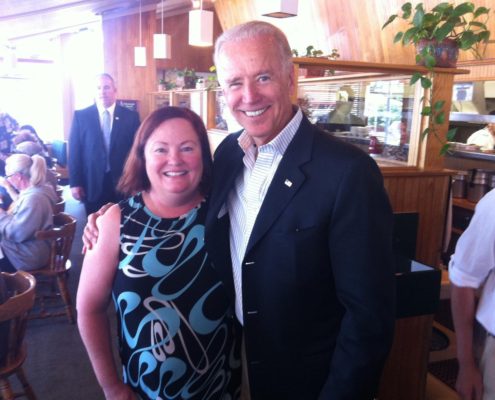 Camille Chijate, who took over as Hobee’s owner with her husband Daniel in 2017, had the honor of hosting Vice President Joe Biden at Hobee’s Sunnyvale four years earlier.

The new owners continued Hobee’s award-winning tradition by swiftly snagging major honors of their own, including: Best Breakfast by the Palo Alto Weekly (2017 – 2019), Mountain View Voice (2019), Silicon Valley Metro (2018), and the Peninsula Daily News (2018). Camille and Daniel were also recognized for their inspiring professional journeys. They were awarded both the 2018 Office Depot Workonomy Award for Entrepreneurship and the 2019 Entrepreneur of the Year Award from the Renaissance Entrepreneurship Center.

Like all restaurants around the globe, the COVID-19 pandemic has had a profound impact on Hobee’s. The chain has risen to the challenge by expanding outdoor seating, offering new delivery options and employing the highest standards of safety and sanitation. Sadly, Hobee’s Cupertino become a notable casualty in the Coronavirus Era. With a major redevelopment of The Oaks Center looming, franchisee Michael Lashen decided that it did not make sense to reopen the restaurant after Shelter in Place was lifted only to close again for demolition a short time later.

Despite the difficulties posed by the pandemic, the company is determined to prosper. Backed by its committed employees and legion of loyal customers, Hobee’s will continue making memories for many years to come! 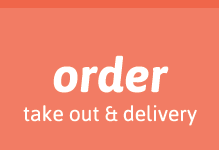