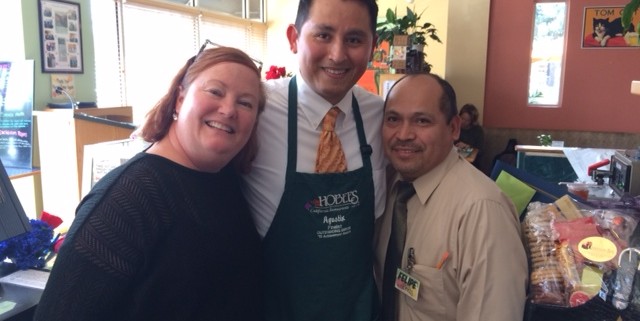 We’re pleased to announce that Agustin Perez, who recently celebrated his 16th year anniversary with Hobee’s, has been awarded this year’s Paul Taber Commitment to Excellence Award. The Paul Taber Award is given each year to an employee who demonstrates the founder’s legendary dedication to service and quality.

Agustin has enjoyed a long career at three South Bay Hobee’s sites. He began at the old Town and Country Village location in San Jose as a host, and then transferred to the Pruneyard shortly after we opened in 2000. During his first years, Agustin didn’t speak much English. However, he still managed to stand out due to his excellent work ethic and ever-present smile. After hosting for a couple years, Agustin was given the chance to train as a server at the big and busy Pruneyard store. He thrived in the position and remained a popular fixture there until 2014, when the restaurant closed. Fortunately, we didn’t lose Agustin. Without missing a beat, he jumped on board with Hobee’s Montague, along with many Pruneyard regulars who followed him.

Montague General Manager Felipe Zarate, who has worked with Agustin for well over a decade, had lots of great things to say about his employee: “Agustin is so great with the customers”, he said. “He always anticipates what they need and never stops smiling. He’s on time and committed to being the best server he can be.” Other co-workers no doubt agree. In February 2010, several submitted enthusiastic comments about Agustin’s upbeat attitude and gracious service. As a result, he was named Star Employee of the Month.

Agustin’s exceptional performance and consistency over so many years is inspiring. We’re proud to honor his contributions to Hobee’s with our 22nd annual Paul Taber Commitment to Excellence Award.