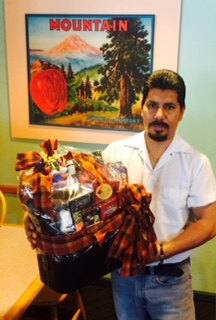 With sales records shattered at his store during the past year, and co-workers Felipe Zarate and Lety Martinez receiving big awards, we could not resist going back to Montague Expressway for our company’s biggest honor: We proudly present this year’s Paul Taber Commitment to Excellence Award to Francisco “Pancho” Ramirez, Montague’s outstanding Kitchen Manager.

The Paul Taber Award is given each year to an employee who demonstrates the founder’s legendary dedication to service and quality. Pancho models Paul in so many ways: He is focused on preparing the highest quality food and takes pride in presentation and accuracy.

For the past 27 years, Pancho has been a prime asset to Hobee’s kitchens in the South Bay, including Montague, San Jose / Town and Country and Pruneyard. He did not immediately become a Kitchen Manager; that took a decade more of being one of the company’s best cooks. When he finally did take the promotion to KM, Pancho shined. He used his experience to show others how to excel in their jobs.

The past year has been a great year for Montague, and Pancho has been a big reason for the store’s big hike in sales. The food scores on the secret shopper reports are consistently high, and we receive comments all the time from happy Montague regulars. Pancho also maintains an enviable food cost and helps Felipe control the overall labor cost.

Pancho already has a terrific Achievement Awards record: He won the Outstanding Kitchen Manager Award three times (2003, 2004 and 2010).  Nevertheless, it’s time to recognize his lasting contributions to Hobee’s with this major accolade. Congratulations and thank you, Pancho!