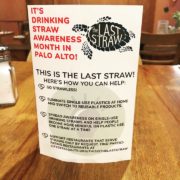 Did you know 500 million straws are used each day in the United States alone? Plastic straws are among the top 10 marine debris items found on our beaches. Plastic never disappears, instead it breaks down into tinier pieces that marine life can mistake for food. Seventy percent of all seabirds and 30% of all sea turtles have plastics in their digestive systems. Once an animal eats plastic, their life expectancy lowers by 50%. By the year 2050, there will be more plastic than fish in the ocean.

With that in mind, Hobee’s has teamed up with dozens of other restaurants to partner with Girl Scout Troop 60016’s “Last Straw” initiative. We will now be offering straws upon request. Thanks for helping us to reduce straw pollution and waste! 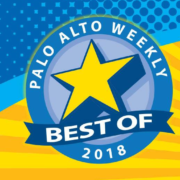 Holy blueberry coffeecake! Hobee’s once again took top honors (for the 23rd time!) in the annual Palo Alto Online & Palo Alto Weekly Readers’ Poll. Check out the current super hero-themed edition and read about what makes Hobee’s the Best Breakfast in Palo Alto. Thanks to all those who cast a vote for us! 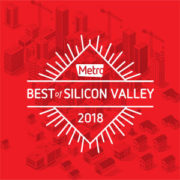 We kicked off spring by winning two Best Breakfast accolades: The readers of both the Metro and Palo Alto Daily News chose Hobee’s as their favorite restaurant to enjoy the most important meal of the day. Thanks for your votes! 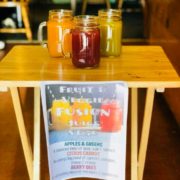 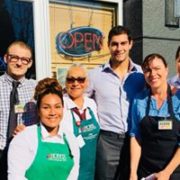 How do you prepare to meet the press to discuss your record-breaking deal with the San Francisco 49ers? If you’re Jimmy Garoppolo, you have breakfast at Hobee’s Montague! The standout quarterback, who thrilled fans with a late season surge, enjoyed a hearty Hobee’s breakfast in early February. Garoppolo graciously posed for a photo with the Hobee’s crew before heading off for his life-changing media conference.

Thank, Jimmy, for sharing your big day with Hobee’s! 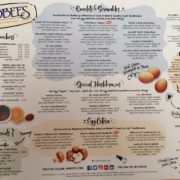 The New Year brought a major surprise to the Hobee’s faithful: a revised menu featuring over a dozen new selections and a fresh new look debuted. Customers were thrilled to find tempting new additions like the Stromboli Omelet, the Nutella Stack, Bravo Breakfast Burrito, Spaghetti Classico and the West Coast Hoagie. After rotating as wildly successful summer specials, a trio of Power Bowls also made the final cut: Guests will have a difficult time choosing from the Silicon Valley Bowl, the Teriyaki Aloha Bowl and the Southwest Power Bowl.

Of course, most of your of your old favorites are still on the menu. And if you don’t find something you’ve enjoyed in the past, ask your server if the kitchen can make it for you. We have a huge list of former menu items that we call “the X Files”!

We are so very sad to announce the passing of longtime Hobee’s co-owner Peter Taber. Peter died peacefully at his Los Altos Hills home yesterday after a yearlong battle with melanoma. He was 63 years old. His husband and fellow former owner, Edward Gerard Fike, was by his side.

Soon after his father, Paul, opened the first Hobee’s in Mountain View in 1974, Peter decided to join the family business. His contributions are hard to overstate. Peter thrived in his various roles at the company. He served as president for nearly 20 years, overseeing Hobee’s during its peak growth phase which saw the chain expand at one point to 13 family-owned and franchised units. Peter was a talented chef and formulated some of Hobee’s most iconic recipes, including our world-famous blueberry coffeecake. During his tenure, the awards poured in: Best Breakfast, Best Brunch, Best Restaurant for Kids, Business of the Year (in six cities and our congressional district) and many more.

Peter loved the people part of the business. He got to know his legion of regular customers by name and took an active interest in nurturing employees at every level. His kindness, compassion and encouragement resulted in staff loyalty quite rare in the industry. Today, a large percentage of employees celebrate one or more decades with Hobee’s.

When Hobee’s was sold in June 2017 to veteran employees Camille Chijate and her husband Daniel, Peter was thrilled to witness the transition to the most qualified, capable buyers. Hobee’s carries on with Peter’s shining spirit and influence felt in every restaurant.

Thank you, Peter, for your talent, grace, wisdom and friendship. We love you. 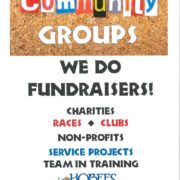 We’re proud to lend a hand to vital community institutions such as PTA groups, school clubs, sports teams and non-profits. We donate 20% of all sales generated by verified attendees at these events That’s easy money for your favorite community organization!

Click here to schedule your fundraiser or contact Camille Chijate at (650) 493 – 7823 x 166 or cchijate@hobees.com with any questions. 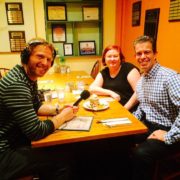 Reporter Ryan Levi was inspired when he read that the original Hobee’s owners had sold the business to two longtime employees rather than a large corporation. His interview with former Hobee’s president Edward Fike and newly-minted CEO Camille Chijate reveals what makes Hobee’s unique in the Silicon Valley’s cash-out culture.

Read the article – or listen to the broadcast – by clicking here. 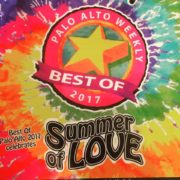 We’re honored to be named Best Breakfast once again by the readers of The Palo Alto Weekly! Even more thrilling was the write up set to a smash from the 60’s. (Someone of a certain age clearly loves us!) Here’s the catchy tune: